The Chicago Tribune says that she is “…one terrific storyteller,” and Newsweek says she is one of the most popular voices in fiction.”

Mother of three, Karen Robards, is the author of 33 books including Superstition.

Superstition is set in the picturesque town of Pawleys Island, SC, which is 20 minutes south of Myrtle Beach. It must be exciting for the residents who own Pawleys Island real estate to read her thriller based in their hometown.

The book is about the unsolved murder of a teenager and the disappearance of her two friends. The mansion where the teenager was murdered is haunted and a reporter looking for a big break sets up a séance but ends up being murdered in the same fashion as the original teenager.

A resident who lives in Pawleys Plantation said that the book had her on the edge of her seat and she had to get up several times to make sure her doors were locked.

Karen Robards is a fantastic suspense writer and this is a great read. The next time you are in a bookstore, be sure to pick up a copy of Superstition.
Posted by Mit Tressler at 7:54 PM 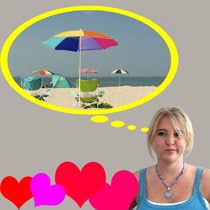 Do you think I should remodel my office?